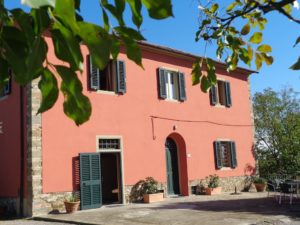 It was grand-father Pietro Lastrucci called “di Fiorindo” who built the house at the end of the 19th century on the remains of an abandoned church, at the top of a hill, facing Vinci on the west side.

It is a simple and typical country house: on the ground floor the big kitchen with the fire-place, the room to keep wheat and “salami”, the dining-room for very special occasions; on the first floor all the bed-rooms (for grand-parents, parents and four children). There was also the cellar with the big barrels of wine and the olive-oil. The house has remained as it was except for the 2 bathrooms on first floor, also the heating of the house is as it used to be: the fire-place in the kitchen and a big wood stove upstairs to heat the bed-rooms. 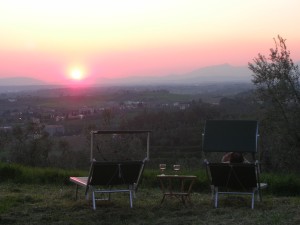 … a hill facing Vinci on the west side

The name of the property is the original name from the area surrounding that was called “Marcello”, the land around the house was and still is all cultivated with olive trees as well as a vineyard on the east side at the bottom of the hill; in front of the house there’s a “barn” to keep working tools, it housed the rabbits, the pigs and on the west side there was the henrun. The big “aia”, the space just in front of the house, is still the best spot: from the top of the hill you can enjoy a beautiful view, the same landscape that you can admire in many of Leonardo da Vinci’s masterpieces.

Laura, who takes care of the house and its guests, with her father Pietro Lastrucci, the owner of La casa di Marcello, grandson to Pietro who built the house at the end of 1800

The house was well equipped, and we had everything we needed to sleep and feed seven of us in comfort. Laura met us in Vinci...

I booked this house as the pictures which Laura had put up for us to see really sold it to me. It was comfortable and...

Hi there,  We just came back from 7 nights at Casa di Marcello.  We are 10 people family, and the house was comfortable with a...

This website uses cookies to improve your experience while you navigate through the website. Out of these, the cookies that are categorized as necessary are stored on your browser as they are essential for the working of basic functionalities of the website. We also use third-party cookies that help us analyze and understand how you use this website. These cookies will be stored in your browser only with your consent. You also have the option to opt-out of these cookies. But opting out of some of these cookies may affect your browsing experience.
Necessary Always Enabled
Necessary cookies are absolutely essential for the website to function properly. This category only includes cookies that ensures basic functionalities and security features of the website. These cookies do not store any personal information.
Non-necessary
Any cookies that may not be particularly necessary for the website to function and is used specifically to collect user personal data via analytics, ads, other embedded contents are termed as non-necessary cookies. It is mandatory to procure user consent prior to running these cookies on your website.
SAVE & ACCEPT